Sometimes it’s difficult to deal with a friend who suffers from an anxiety disorder. They’ve probably caused you at least a little bit of stress, confusion and annoyance ever since you’ve known them.

Phones calls aren’t answered, plans for a night out are rejected and so on but there are a few things you need to understand about what your friend is going through. Their experience of the world is different from yours and anxiety is a hard burden to shoulder.

Keep reading to find out more about their issues and cut them some slack because they already have enough to deal with.

Here are 20 things you must understand about your friend with anxiety: 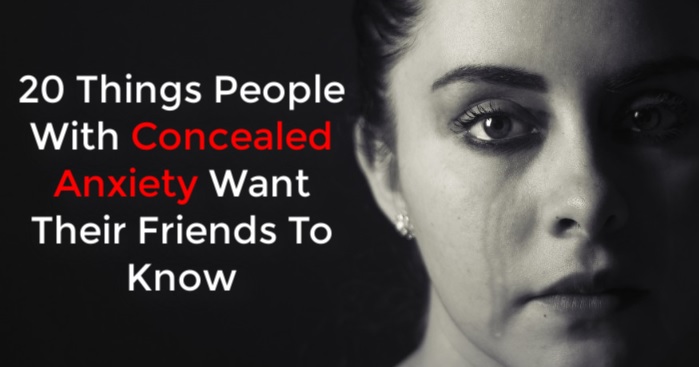 1. Anxiety attacks can start over the most trivial of things and you might not get why they’re triggering your friend. All you need to know is that no matter how the rest of the world sees it, it is a serious problem for them.

2. Predicting an anxiety attack is hard and they can strike at any times. Whenever it hits them, just be there to give them the support they will necessarily need.

3. If they’re not answering their phone or replying to texts, that doesn’t mean that they’re ghosting you. It’s not easy putting on a brave front for the world when anxiety is eating them up inside. They do want to be there for you but not all battles can be won.

4. Practice patience. An anxiety attack can come in many different forms. They won’t always start panicking. Rage and irritation over tiny issues are also symptoms of anxiety. Sometimes they might also just be very frustrated.

5. If they take out some of their irritation on you, just remember that those emotions are not actually directed at you.

6. Peace and calm don’t come easily to your friend. Even at their happiest and most tranquil, they’ll be worried and waiting for the other shoe to drop.

7. If they’re not saying much, it doesn’t mean that they’re upset or weary or that you’re boring them. Something is weighing on their mind so they’re unable to really pay attention to other things.

8. Explaining anxiety can be impossible because there are times when they can’t understand what is triggering the feeling.

9. When they apologize for bailing out on plans or for hurting you through their actions, they really mean it. It’s bad enough what their anxiety does to them and they don’t want it to cause you pain as well.

10. It might seem like they’re craving solitude all the time but that’s not true. You need to show them that you care and they’ll be very happy to just feel included.

11. Overthinking is just another side effect of anxiety and it can be completely draining.

12. Their problem is not something that you can fix. All you have to do is show that you care about them as they are.

You might also like reading: 5 Things You Need To Cut Out Of Your Diet That May Be Causing You Extra Anxiety

13. When you see that they are not comfortable in a particular situation, let it go. Don’t try to force them into something because that only makes them more anxious.

14. For your own sake, don’t go around telling them to just move on or that they’re being foolish.

15. Make sure that you include them in your plans. Anxiety is unpredictable and they’ll try to make it when they can.

16. If they’re done and cannot go any further, they’re not just saying that for the sake of it. Understand that they’re having difficulty doing whatever it is so let them be and allow them to relax.

17. It is really hard for them to turn you down or decline an invitation. Don’t push them because they’re most likely feeling much worse than you are.

18. Being isolated at times can actually help them. Going out and getting fresh air doesn’t actually cure anxiety and different people have different ways of dealing with it. Just give your friend the chance to get some peace and rest.

19. Remember that every conversation they have with you will be turned over and over in their minds later on just in case they did something wrong.

20. Just because they suffer from anxiety, doesn’t mean that it defines who they are. They are also as human as the rest of us and they need all the love they can get.